They make room for more girls on the skate scene

Systraskate was started to get more girls in Skellefteå to start skateboarding. And in just a few years, the initiators have seen a big difference. “I work in the city and often see girls walking around with their bookbags and boards. That feels really great,” says Felicia Selin.

Together with Hanna Fjellstedt, Amanda Lund and Sara Lundström, Felicia is the woman behind Systraskate, which is located in Lejonströmsskolan’s skateboarding premises. The concept is simple – girls and non-binary people of all ages are welcome and no previous experience is required. Participants get to borrow a board, helmet and other protective equipment.

“When we started in the winter of 2019, we had 20–25 members and last season everyone seemed to have brought friends with them, because the number of members increased to almost 70,” says Hanna, who was also behind the previous initiative Tjejskate.

“I started it in 2009 when I was in high school. We were headquartered at the E4 youth center and there were about ten of us girls, which I thought was a lot at the time. Today at Systraskate, we can have around 35 skaters at any given time. It’s super cool,” says Hanna. She herself discovered skateboarding when she was twelve years old.

“My dad’s friend Patrik was a boarder, and I just thought, wow. I started watching skate movies, skated all the time during the day and forced my dad to film me. It was a ton of fun and I have lots of videos from that time,” says Hanna.

Skateboarding has always been a male-dominated sport, and it took several years before she found a female friend to skate with.

“I wish there’d been an initiative like this when I was a kid because then there were no skater girls to look up to here in Skellefteå. That’s why it feels good to give this chance to young girls today,” she says.

In the future, she and the other promoters hope to hold a Systracamp in the premises.
“We’ll have pizza, movies, popcorn, have a sleepover and skate a lot, of course,” says Felicia.

It’s Tuesday night and Lejonströmsskolan’s skateboard premises are bustling with activity. Maria Hägglöf watches her 6-year-old daughter Signe whizz by on a board. They found out about Systraskate last fall, when they ran into Hanna Fjellstedt at Folkparken’s activity park. 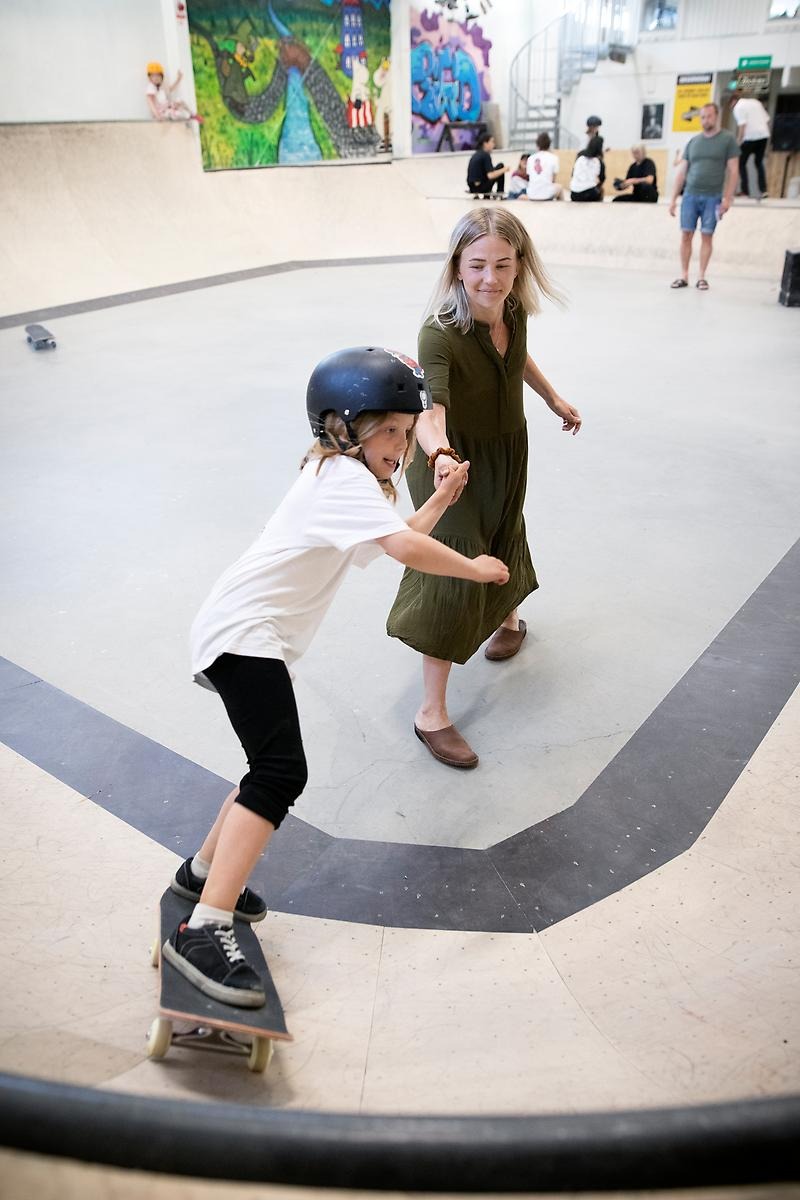 “We went to Systraskate the following Tuesday and Signe was bitten by the bug right away. She had a great time, thought the girls here were so cool and wanted to sleep over in the premises,” Maria says. She continues:
“The people who started Systraskate are great role models and it’s amazing what they’ve done for our girls. They’ve created an interest and a forum where children can have fun. It’s just like joining a soccer team, that sense of belonging, something to strive for and develop one’s skills. 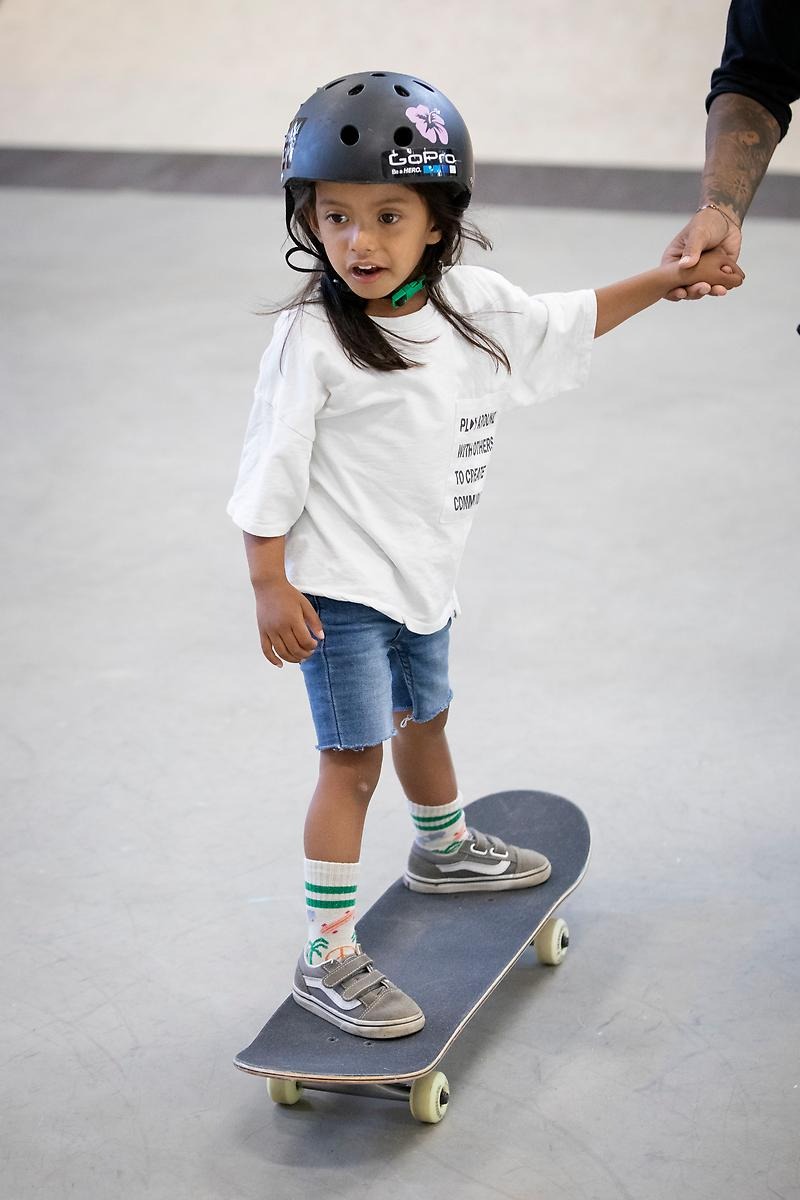 At Skellefteå’s 2019 sports gala, the Skellefteå SkateboardIng Association was honored as the association of the year. They received the award for their intensive work to create a new and inclusive meeting place. “The association is characterized by togetherness and community in their work to engage children, young people and adults...,” the explanatory statement read. In addition, Hanna Fjellstedt was one of three nominees in this year’s honorary award category.
“It said my name on top and then Systraskate underneath, so it was a little unclear who or what the organizer was nominating. I didn’t win the prize, but it was an honor just to be there. And it’s great that there were so many of us from the association in attendance,” says Hanna.

”Some kids doesn't want to go home when we are closing, that's so fun!"

She and Felicia both confirm that the skateboarding scene in Skellefteå is thriving.
“There are lots of people in the hall and tons of people both in Folkparken’s activity park and in the new bike park on Vitberget. It feels like skateboarding is finally starting to be seen as the sport it actually is. We see girls who are overjoyed with their new boards and who are practicing to get better, which is nice. And then they meet a lot of new friends too, and that’s the best part,” says Felicia.

You can find more information about Systraskate and the Skellefteå Skateboarding Association HERE! 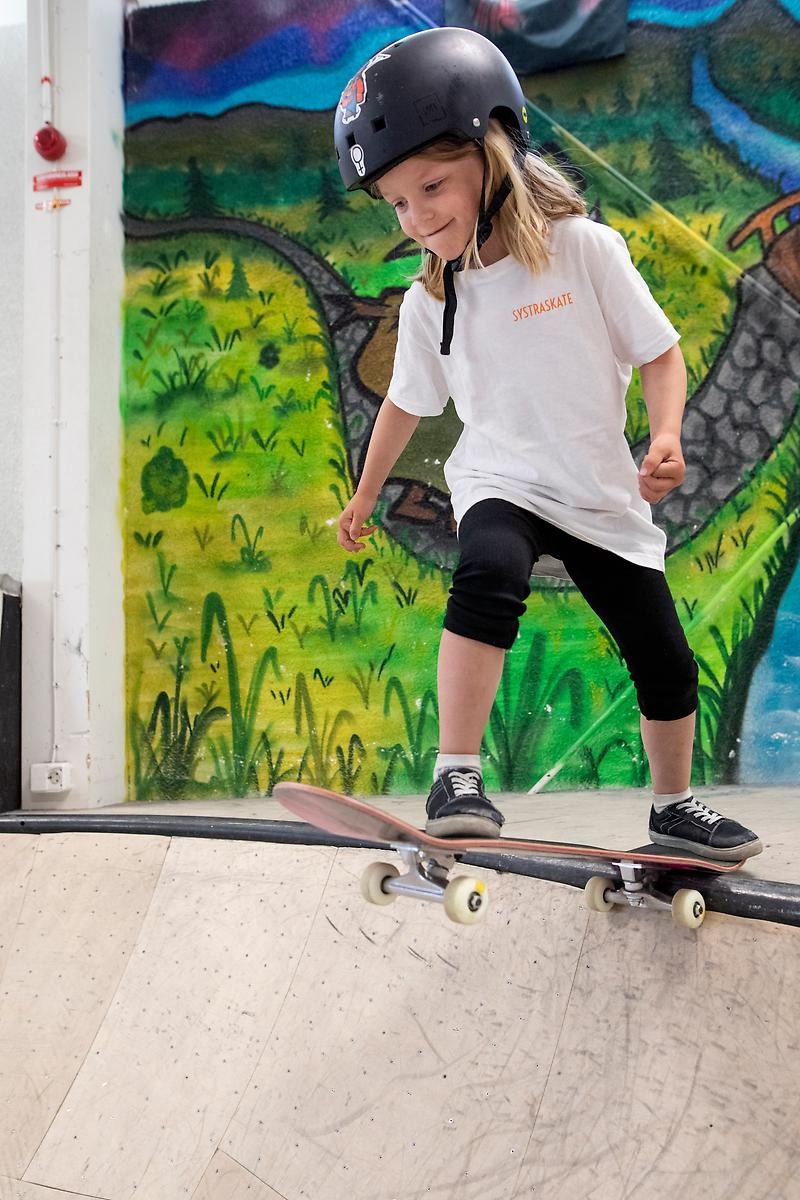