The new owners of Lövångergården have high-flying plans for the facility. Several associations are working hard to benefit the community and local food producers are finding new ways to reach their customers. The combined power of their efforts is putting the wind in Lövånger’s sails.

When Celina and Emelie Ahlback were planning their wedding, they started looking for a facility adapted for both weddings and conferences. The Stockholm-based couple’s search for the perfect location took them everywhere from deepest Södermanland all the way up to Gävle, but nothing they saw appealed to them. But when Celina’s parents Magnus and Catarina Ahlback (the owners of Lufta Camping and residents of Flarken for four years now) tipped them off that Storstugan in Lövånger was for sale, everything fell into place.
“A restaurant, a fantastic party venue for weddings, and proximity to a church and accommodations.
The facility had everything we were looking for, so we bought it sight unseen. My mom had sent us lots of pictures and we had also looked at the blueprints, but otherwise we bought the place on blind faith. Neither Emelie nor I had been to Lövånger before we moved here,” says Celina. 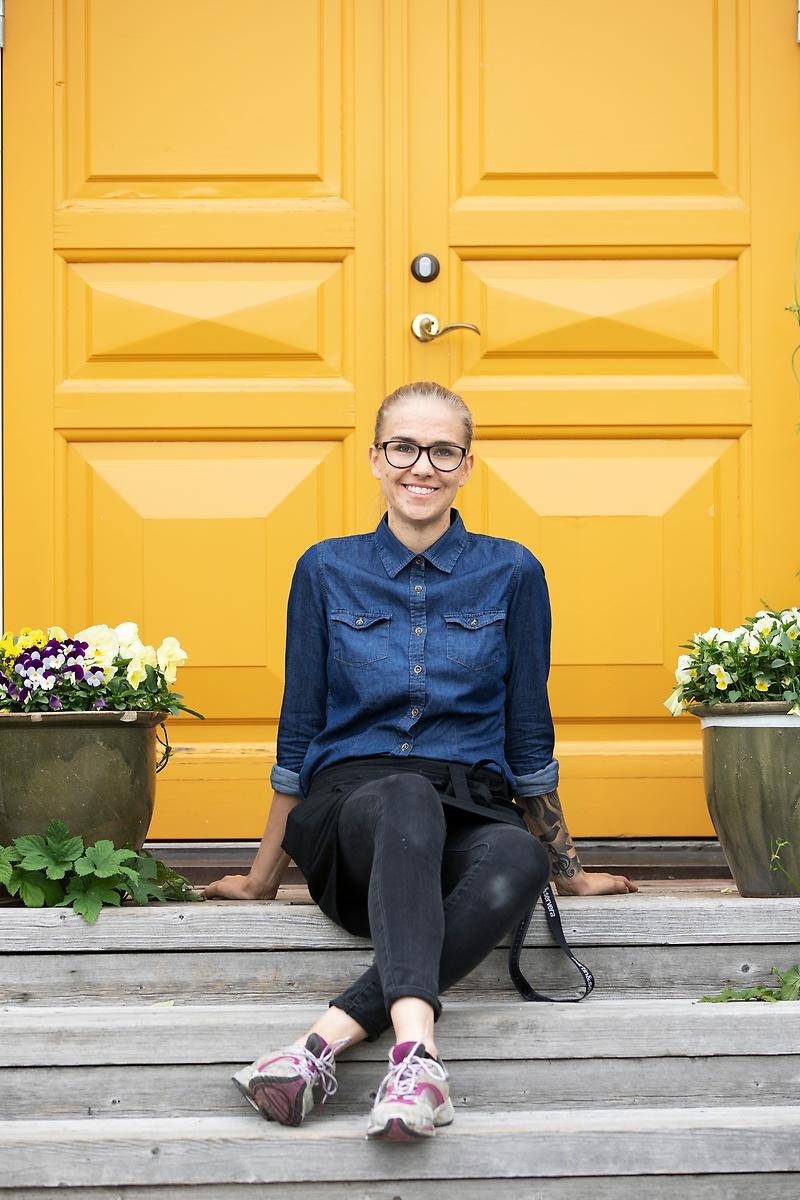 They took over Lövångergården, formerly known as Storstugan, as well as the campsite and the land downhill from the building. They also signed an agreement with the local rural culture society to handle the rental of the church cottages. During the spring they left Stockholm and moved to Flarken, about 500 meters from Celina’s parents’ house.
"It takes 15 minutes to drive from home to work, which is really nice. We thought about living near the facility but realized that we probably would’ve ended up working too much. It’s nice to be able to go home and get some distance,” says Celina, who actually went to school in Flarken when she was a little girl.

“The house that Mom and Dad live in is a family home on Dad’s side. We lived in it for a year in 1997, and I went to first grade at Flarken School. After the school year we moved back to Stockholm, but I’ve been up to Flarken every winter and vacation, and I learned to ski on the slopes of Bygdsiljumsbacken,” says Celina.
Three days after they moved there, on Walpurgis Night, Celina and Emelie had a soft opening for their business on Lövånger Farm.
“We didn’t have any staff at the time, so we grilled burgers and Emelie gave the spring speech. A lot of people showed up, which was fun. Everyone wanted to come up here and see who we were. Three days later we had a grand opening with a barbecue buffet and pub evening. The restaurant was packed. It was a good start,” Celina says. 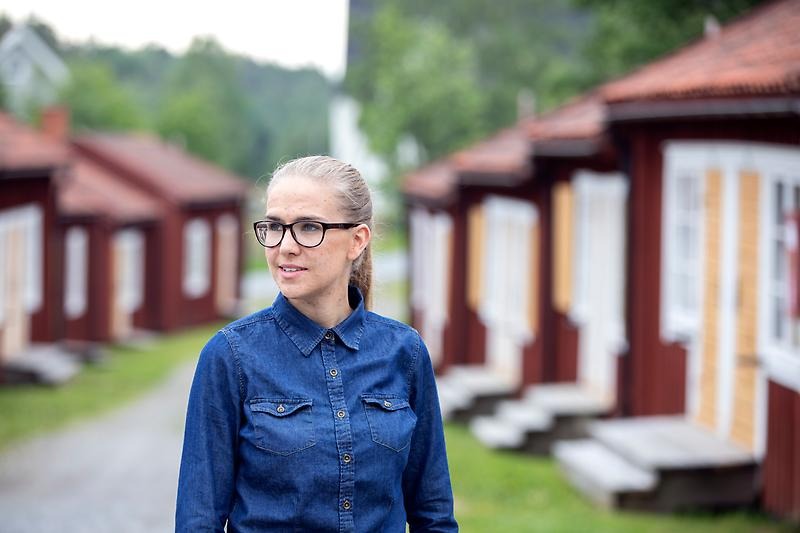 Snacks instead of fast food

Both women had worked as restaurant managers at the same fast food chain before taking over Lövångergården, and they’ve brought along many experiences from their previous jobs. But Celina mentions an area where they need to be re-trained.
“We’re used to four-second service, but you can’t apply that concept here. The guests who come here want to talk for a while and take
their time. It’s a big transition, but a nice one,” she says.
What are your plans going forward?
“Our focus is on weddings and conferences, and we’ve already received a lot of conference bookings. In the fall, we’re going to wedding trade fairs and will shift our focus to that. We already have some people who’ve called and booked weddings for next year, and we hope to get even more.”

What do you think about the reception you’ve received in Lövånger?
“It’s been great. Everyone in the area has some connection to this place and many have come by and helped us as best they can. We’ve also received good support from the rural culture society.” 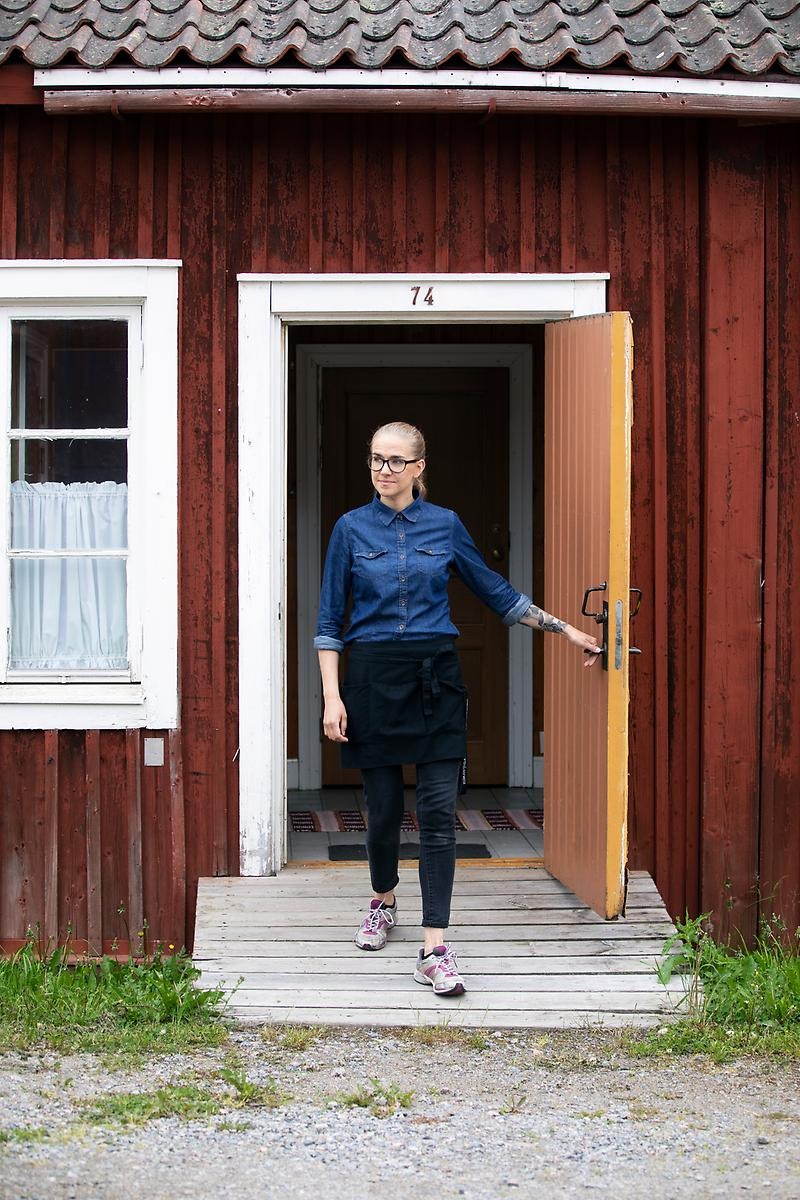 Evy Andersson, Chairwoman of the Lövånger Rural Culture Society, notes that the residents of Lövånger are deeply committed to the church town.
“It’s the oldest one in Västerbotten and there are families who have owned the same cottage for several generations. This means that the cottages unite people, and there are many who have put in a lot of volunteer work to take care of them,” she says. The society has been granted SEK 1 million from the Swedish Board of Agriculture and the County Administrative Board to refurbish the cottages. The society itself is investing ten percent of the cost, which it has raised through donations. 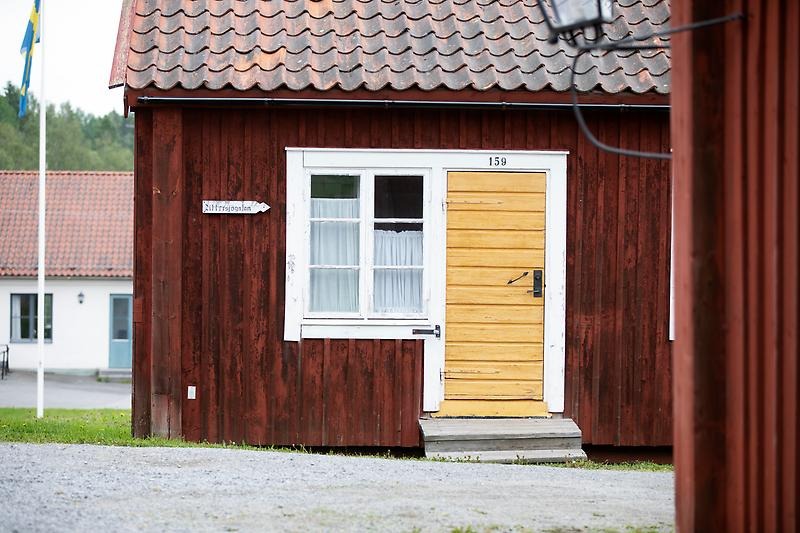 “Work will get underway after the holidays. We’ll stretch the money as far as we can and then we’ll apply for more funding,” says Evy.
Another ongoing project in Lövånger is the transformation of the former trading port in Kallviken, just south of the Lövånger rural center. The plan is to turn it into a marina.
“We’re really looking forward to it,” says Evy, who is also involved in other associations in Lövånger, such as Arena Bjuröklubb and the Bjuröklubb Chapel Association.

Evy has been honored as Västerbotten’s “Enthusiast of the Year” in Hela Sverige ska leva. The following year her great commitment to her hometown earned her a place among the nominees for the Norran Hjältar award given out by the Norran newspaper.
“It was of course really nice. When I retired, I started to get involved in community functions. Those of us who live in the countryside must take it upon ourselves to fight for its development and if you just keep nagging, something happens in the end.”
Just before Christmas 2016, Lövånger became a hot topic in the press when the tree erected in the park by the church received scathing criticism on social media. As chairwoman of Lövanger’s rural development association, Evy defended the tree in an article in Norran. She acknowledged that the tree was ugly but managed to turn it into something positive with statements such as: “You can see it from an environmental point of view – that you’re taking care of the forest by ridding it of an old spruce.”

Several media outlets, even at the national level, latched on to the reporting on the tree, and one night Evy even received a call from a Canadian radio station that had gotten wind of the story about the odd tree.
“It’s surprising how incredibly fast such a tiny thing can take off in the media. That news of an ugly tree can spread around the world. It was hideously ugly, but does that really matter? Not at all,” Evy says. For the Christmas market the same year, the Lövånger company Furniture Farm produced a miniature of the tree. The wooden figurines of the “Ugly Spruce” sold out immediately.
“All the hullabaloo meant that more people know about Lövånger now, and people still talk about the tree today,” says Evy. 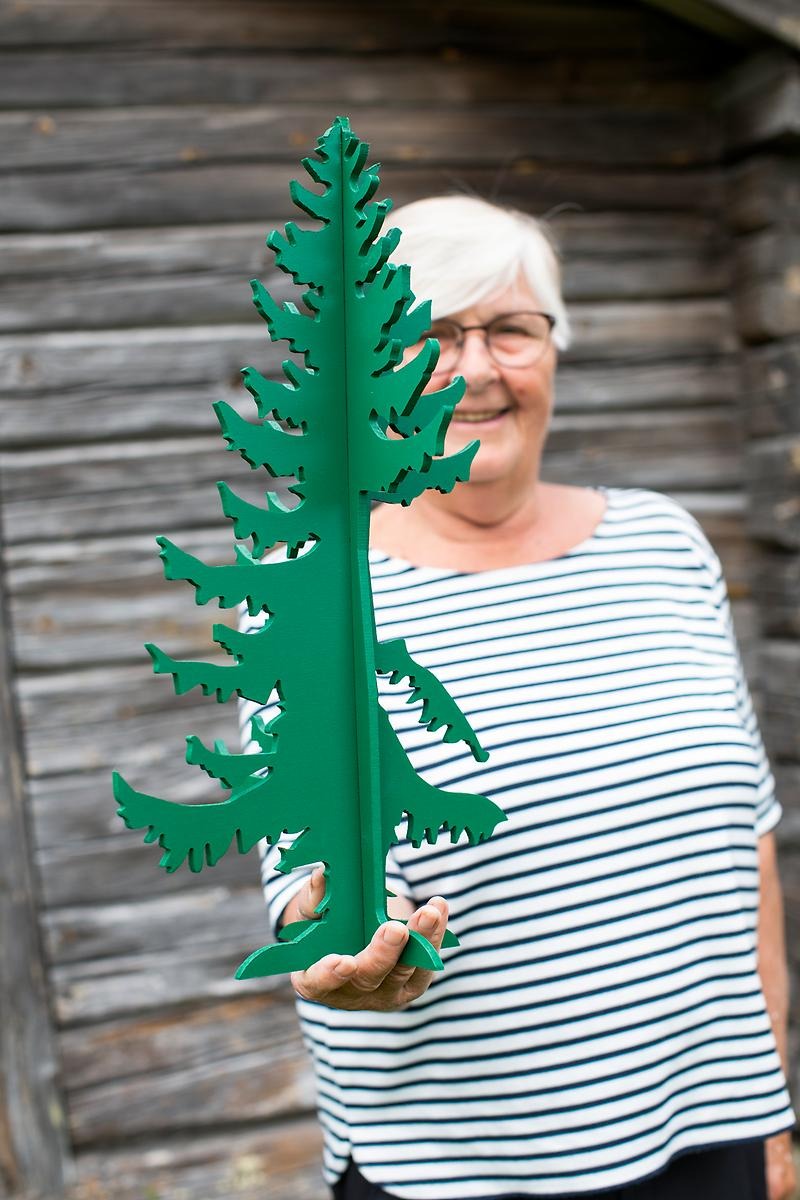 The local food producers in Lövånger have also found ways to reach more people. Several farms co-founded a REKO ring in Skellefteå and many producers participate annually in MatTuren, which is arranged at the end of the summer. As part of that tour, farms in Skellefteå Municipality open their doors to the public and sell their food and products. Bark bread baker Anders Hallberg in Kåsböle is one of those who participated. 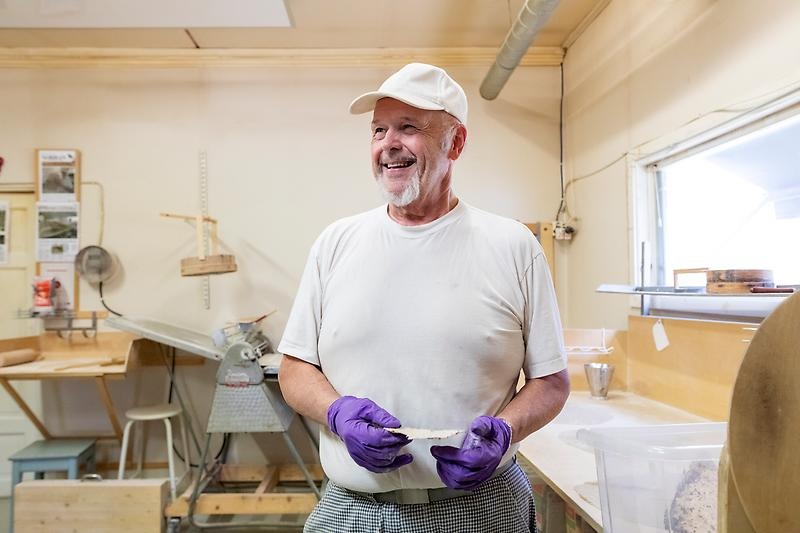 “MatTuren is an incredibly good initiative and draws tons of people. It’s great that so many folks want to come here and see what we’re doing,” says Anders, who has been baking the unusual bread, once a staple in times of famine and crop failure, since 2005.

Today the bread is a luxury product. Anders has delivered bark bread to the Nobel Festival and several diplomas in food crafts adorn the walls of the bakery.
“Few mills are able to grind the bark into flour, which makes it expensive. One Finnish producer sells the flour for SEK 2,500 a kilo,” says Anders, who managed to find a mill on his own that can handle the grinding.
At the beginning of summer, when the pine trees are in the candle stage, he pulls the inner bark off the north side of the trees. He then dries and roasts the bark before grinding it down to flour that he uses for the bread.
“I also add juniper berries and fennel, which enhance the flavor. The bread contains lots of antioxidants and magnesium and has been approved as a health food product by the Swedish Food Agency,” says Anders.

What do you think about the drive among the food producers in Lövånger?
“It’s increased over the years and more and more people are joining the bandwagon, which feels totally right. It’s in keeping with the times, and in Skellefteå there’s a real hunger for locally produced food. 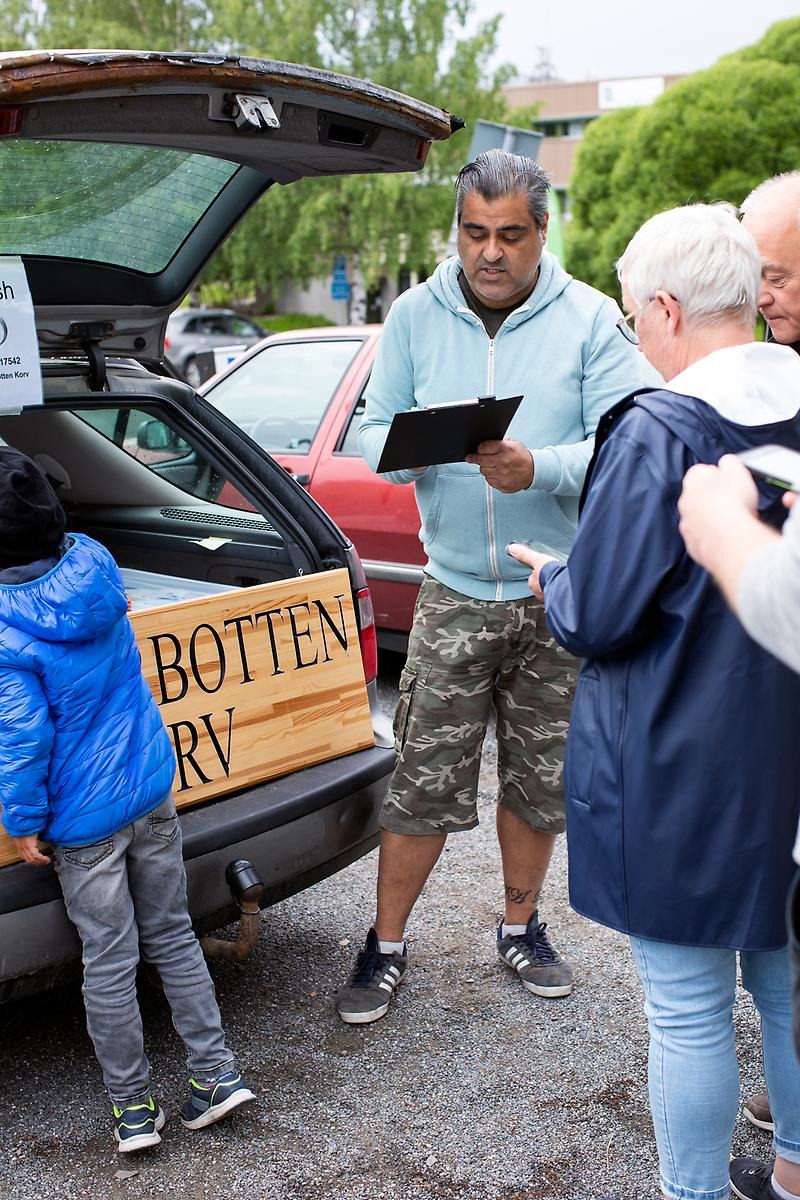