The next chapter of
Lina’s life begins in Skellefteå

After 16 years, Lina Öberg has moved from the suburbs of Stockholm to a house in Sunnanå, Skellefteå. She and her husband Nils Bränström found similar jobs to the ones they had in Stockholm.

“It feels like a brand new Skellefteå compared to the one we left.” If this development had not taken place, she is not so sure that they would have been moving back home.

Around the Christmas holidays, the Öberg/Bränström family headed back north. It was time for a new start to their family life, in a new neighborhood but a familiar city.

Or perhaps not so familiar after all.

“We have been going up at least once per year to see family and relatives, but once you live elsewhere, all the changes become very clear. In many ways, it feels like a brand new city! The center has expanded towards the river and new districts and restaurants have been added, so it’s been a fresh start in Skellefteå,” says Lina. 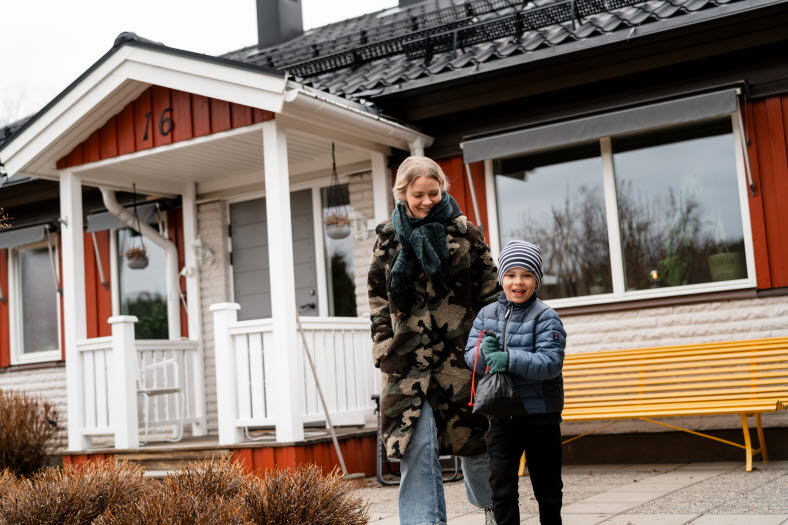 Nils is from Sjungande Dalen and Lina from Bergsbyn. But their choice of moving to Sunnanå and the south side of the river was not a complete coincidence.

“Many of our old friends live here, so it seemed only natural to monitor the housing market and make our way here,” she says.

For those who drive around the neighborhood, it is obvious that they found the right place for their six-year-old son Folke. There are swings and sandboxes everywhere, and the driveways are full of scooters and bicycles. In other words, this is a family-friendly place.

“We have the luxury of having one of my best friends living two houses down, so we haven’t had to look for a bunch of new friends to hang out with. But we were aware that we would need to make an effort and be open to meeting people. In Stockholm, we had friends on the other side of town, and we saw them much less, so from that perspective, we have gained a lot socially. Over there, everything was much more of a hassle, even if you were just seeing friends,” says Lina.

Ever since Folke was born, Lina and Nils have felt that they needed to be “settled” before he starts school.

“Where that would happen, we didn’t know yet. We weren’t sure if it meant staying in Stockholm or moving. But after last Christmas, we started to land in the idea of moving back to Skellefteå, since we are both from here. But there was also the question of jobs of course, which felt like an important factor,” says Lina

Nils started checking the job market and was soon offered a job as a construction consultant at WSP. A little later, Lina was offered a position as digital designer at Once Upon, which is a service that helps you to design photo albums using your own phone.

“I didn’t really know anything about Once Upon, but a friend recommended me to apply. I was pleasantly surprised by the opportunity of continuing to work inhouse with digital design of a product and with a really great group of people. In terms of business, there are so many popping up these days that I had no idea existed before. In general, this is a brand new Skellefteå that I am getting to know. It makes a difference that I was 22 when I left and I will be 38 this summer, so I see things differently, but I don’t know how we would have felt about it if Skellefteå was the same city as 17 years ago. I don’t thing we would be moving back then,” she says.

In the summer of 2003, she started a journey that ended up being much longer than she originally intended. She started a three-year program in information design in Eskilstuna. After finishing, she moved to Stockholm with a friend and started working at an ad agency – then she went through various jobs before getting a foot in the door at Hennes & Mauritz as a consultant graphic designer. In the last 2.5 years in Stockholm, she was working for Polarn o Pyret.

“I am incredibly grateful to have had the opportunity to work at that type of company. One thing that I am taking with me is that they function like any other company. There really isn’t much of a difference, except a larger customer base and market to reach, but here at Once Upon, we are working towards more markets,” says Lina

Now that she has changed the hectic city life of Stockholm for the slower tempo of Skellefteå, she sometimes misses the big city life.

“After so many years, you get used to a certain selection and a high tempo, it’s the good with the bad. It’s less stressful here, and we don’t have to be the first to arrive at the pool to avoid the crowds when we go swimming. We feel that the pros outweigh the cons – and we have real winters again, that’s maybe the biggest gain,” says Lina.

But before then, the family will spend their first summer back in Sunnanå.

“Our son will have a different relationship with our families and his cousins, uncles, aunts and grandparents, and we are all looking forward to that.”