How could Skråmträsk, of all places, become the filming location for something as thrilling as a horror movie? The village is a magnet for families with children and cozy café visits, and virtually every other farmhouse is occupied by a skilled traditional craftsman. We paid a visit to a charming hamlet that never ceases to amaze.

Perhaps villager Erik Hellgren has the answer.
“The spirit of Skråmträsk is very positive; here you can dare to come up with crazy ideas without anyone shaking their head. At least not while you’re looking,” he says, grinning. 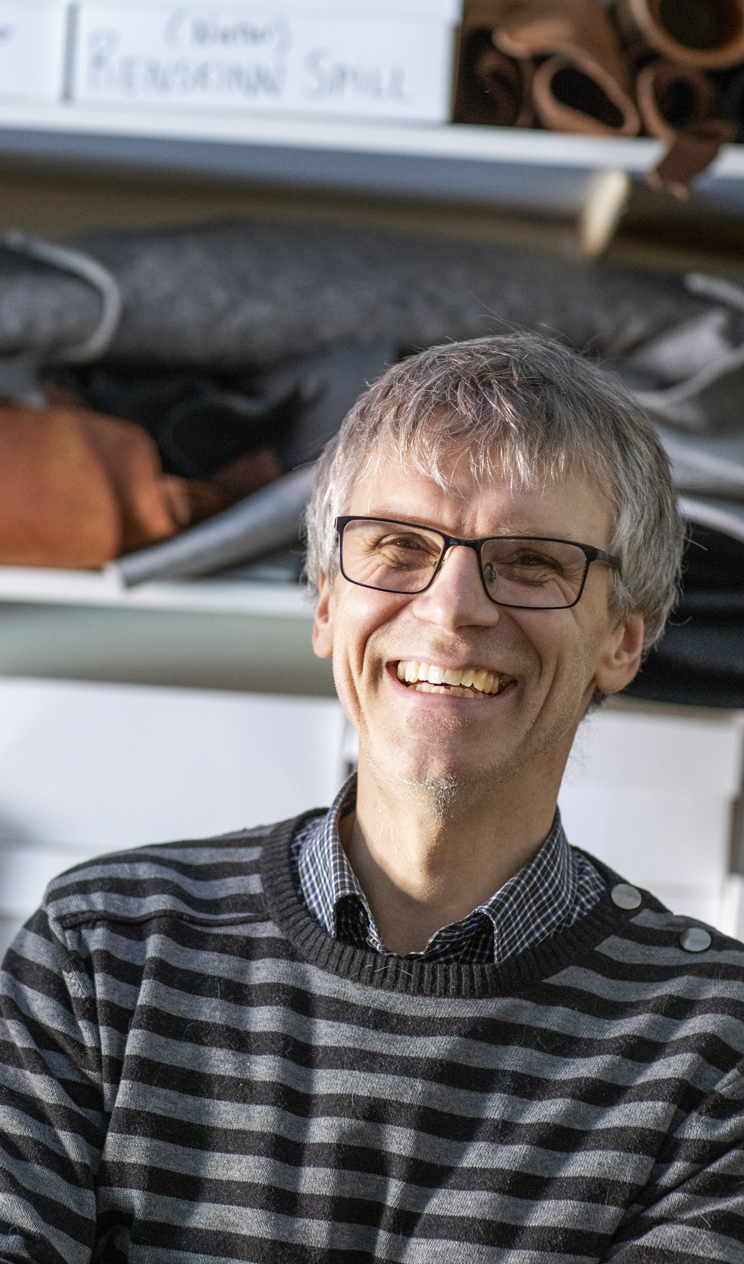 Erik and his wife Asta have certainly challenged themselves with entrepreneurial high jinks over the years. Who could have predicted that the village’s dilapidated mill from the 1940s would be renovated and transformed into a café with White Guide status? Or that investing in the business concept of a country store could pay off in this day and age? In an era when supermarkets and big box stores are reaping success, Erik and Asta went against the tide and took over the village shop, which is now celebrating its fifth anniversary under their ownership. The entrepreneurs’ environmental awareness is a common thread throughout their little village empire.

“We’re driven by sustainable thinking and the need to take care of the nature that we have around us. Because without a healthy natural environment, what do we really have? I spent a ton of time out here in the woods when I was a kid, so maybe that’s why we have this approach - but that idea is just a bit of amateur psychology,” says Erik.

Since opening in 2009, the mill has become Skråmträsk’s main attraction in the summer months, tempting visitors with its cultural events and homemade pastries. Over the course of the summer, thousands flock to the beautiful building in the heart of the village.

“We could never have imagined this response when we started renovating the mill. Some craftsmen have subsequently come forward and told us the doubts they had about our plans. But now we know that some families with children found their way to Skråmträsk through our café, and then ended up buying a house and moving here. That’s nice to hear,” says Erik. 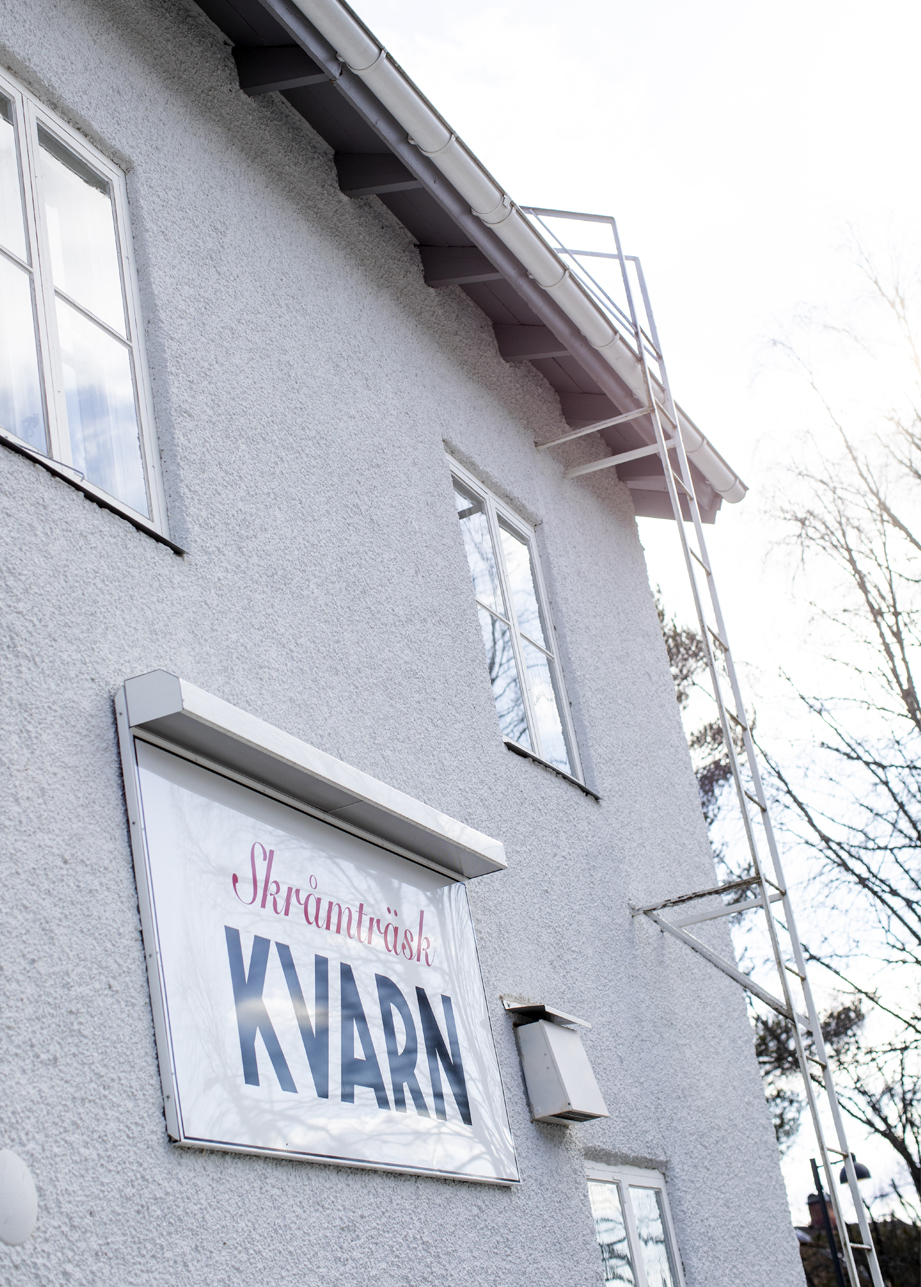 The mill is also Norrland’s only café that has achieved the highest level of KRAV organic certification, which requires that 90 percent of all the coffee must be organic.
“We’re at 95 percent. It feels good to have a margin,” says Erik. When he and his wife took over the business, they installed solar cells on the roof. In the true spirit of Skråmträsk, that crazy idea became a success story.
“It was the largest solar cell installation in the municipality at the time, so many people were curious and came to check it out. The idea spread, and several people in the village followed suit. It doesn’t feel like such a big leap when your neighbor has already done the same thing, and now all our businesses are powered by solar cells,” says Erik.

But of course the word “Skråmträsk” can sometimes conjure up completely different associations than a café and country store – as many people know, Skråmträsk is also the name of the leather shoes that are handmade in a small-scale factory on Erik’s farm, across the country road from the café.
“When we travel south to trade fairs and other events, we have to explain that Skråmträsk is not just a shoe brand, but also a village in Skellefteå Municipality. Then the tables are kinda turned,” says Erik.
He and his friend Erik Parkman started the factory back in 1989, and today part of the production is done at Parkman’s place in the High Coast, while pre-production and sales are handled in Skråmträsk. When we visit the factory, which is also a shop, the appealing smell of leather fills the air. Needless to say, the leather shoes on Erik’s feet are buffed to a perfect patina.

Quality and durability are the heart and “sole” of the company’s manufacturing. That’s why they use vegetable-tanned leather that is completely non-toxic. 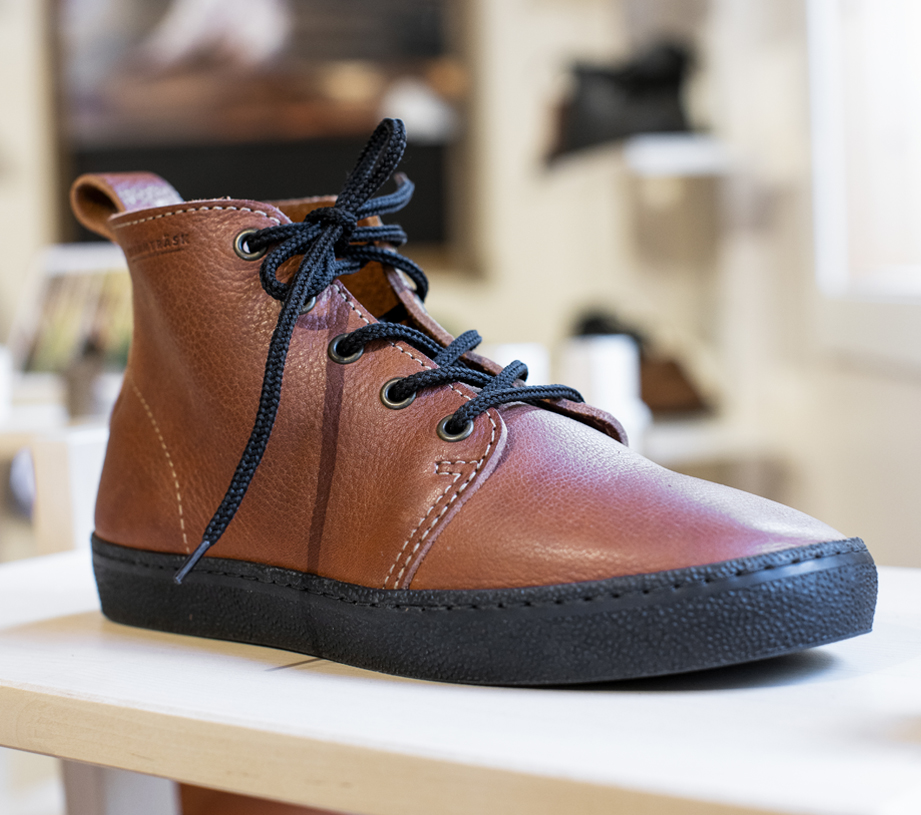 “If you’re a conscious producer, it’s very difficult to go back to something that’s bad for both the environment and people. If you’re going to run a business, you’d best try to do it as well as possible,” says Asta.

On the surface, Skråmträsk is a large and sprawling village. If you’re looking to break in a pair of Skråmträsk shoes, there are plenty of gravel roads and forest areas to wander.
We move on to the village school, which serves students up to fifth grade. Naturally, it’s a major selling point for families with children.
Many large farms are spread out around Lake Skråmträsket, like small, isolated islands in a sea of arable land. The village’s farmers play a key role in keeping the landscape alive. Eventually we arrive at Västra Skråmträsk and Per-Olov and Birgit Andersson’s farm.
They actually share the farm with their son Emil and his family - a modern version of an old-fashioned, multi-generational home. They live in separate houses; P-O and Birgit have taken over the smaller one.

“We live in what used to be called the ‘mother-in-law cottage’. When the old folks moved to the cottage, they could have peace of mind that the youngsters would look after them. But so far, we’ve had to buy our own food,” says P-O with a twinkle in his eye.
His own father was a full-time farmer, and after the farm was closed down his father started doing handicrafts in a small carpentry workshop on the farm. Since his retirement, P-O has taken up the same side job, fashioning everything from wooden spoons to a hurdy-gurdy in his workshop.

But his Skråmträsk skis are the local bestseller, with a birch sole and an aspen top that makes them both light and durable. 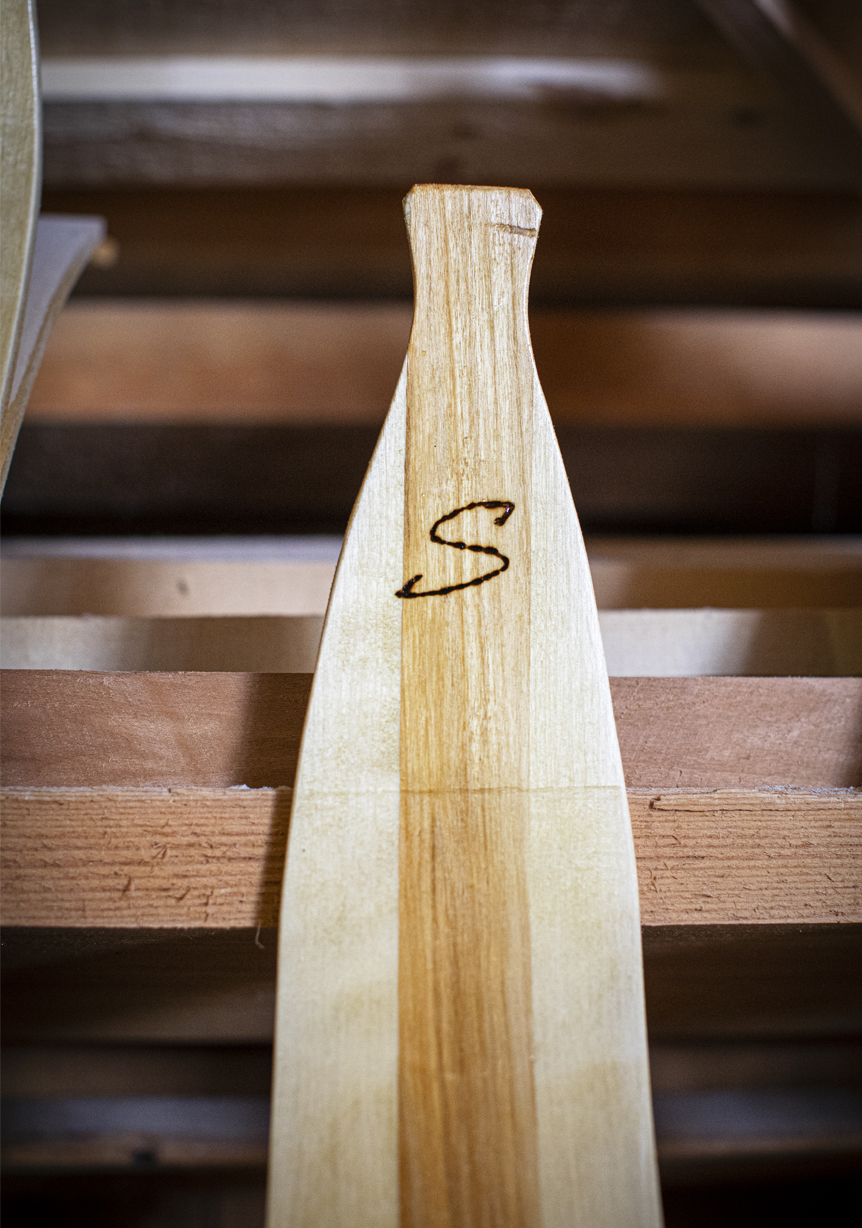 “It’s a side job for me, and I just make them for the people who ask. It’s fun to escape into my ‘man cave’, light a fire in the stove and work with things that I find interesting. P-O makes everything by hand. He selects the trees from his own land, then the timber is cut at the farm’s small sawmill before being brought into the warmth of the carpenter’s cottage. P-O likes the way Skråmträsk has developed and is pleased that the village now has more active associations than he can count. He himself is chairman of the community association that manages the roads and also heads the village’s own real estate company, whose 70-odd co-owners run the gas pump. “We’re happy to sponsor various village activities that contribute to the community’s cohesion. There are usually lots of people who want to gather and socialize. We live in a vibrant rural area and the houses that come out into the housing market sell right away,” he says. 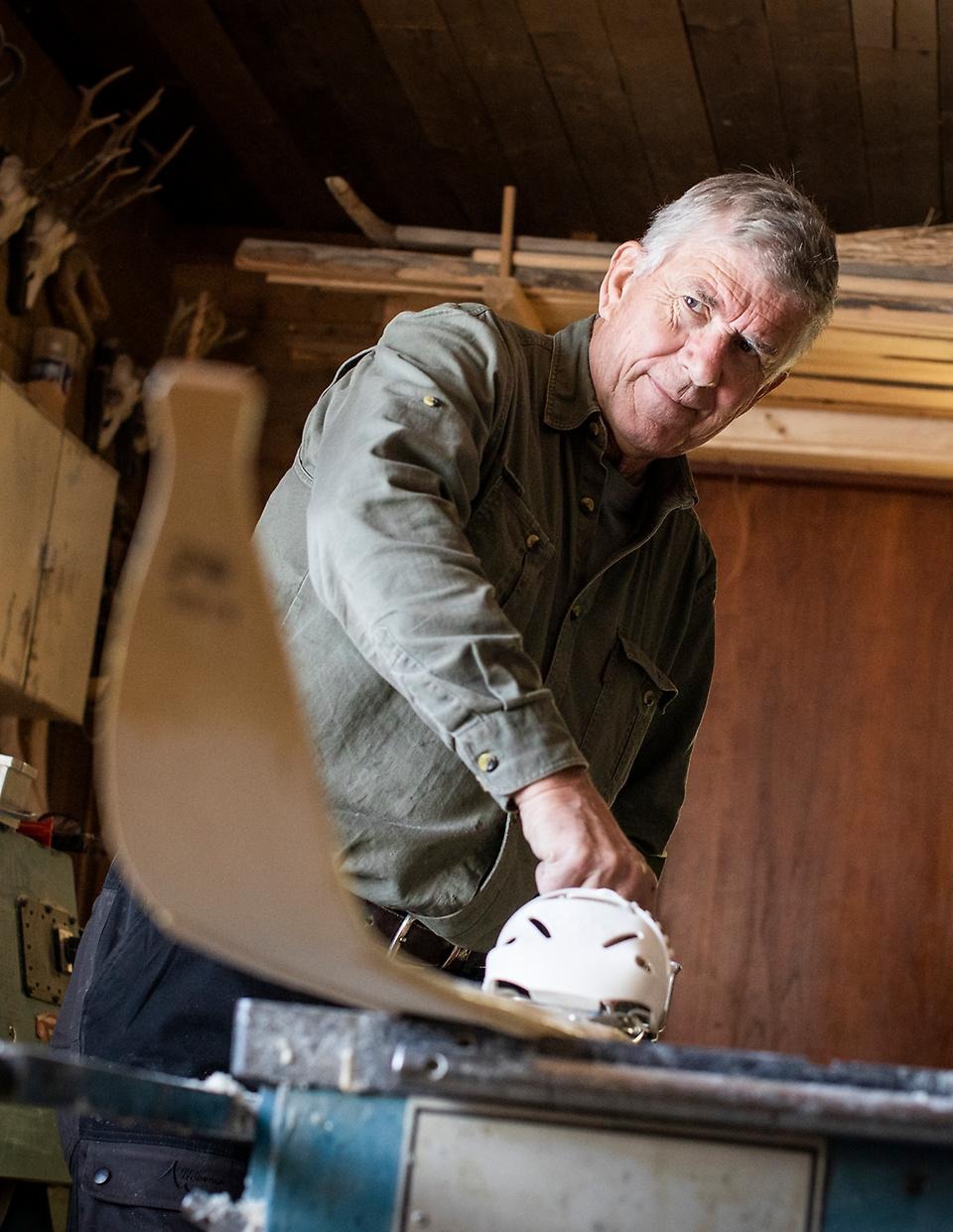 The village association also runs Liabacken, a testament to the area’s sporty and enterprising inventors. The popular sledding slope has been equipped with a lift system – a welcome luxury for those who want to go uphill nearly as fast as they take the way down.
“Ever since we stumbled upon this hidden gem, our family would sooner come here than go to Vitberget. Skråmträsk is a vibrant village that makes things happen,” says Maria Lundberg, who comes from the neighboring village of Klutmark and bobsleds here with her kids.

But what about that horror movie? In the fall of 2019, Atrophy premiered on YouTube – an elaborate short film that became a reality thanks to crowdfunding through which future viewers invested money in the project.

The film was produced by Pontus Lundström, a resident of Skellefteå. And that’s how the filmmakers discovered the old house in Skråmträsk that became the perfect filming location. Watch the film and then make a visit to Skråmträsk – if you dare… 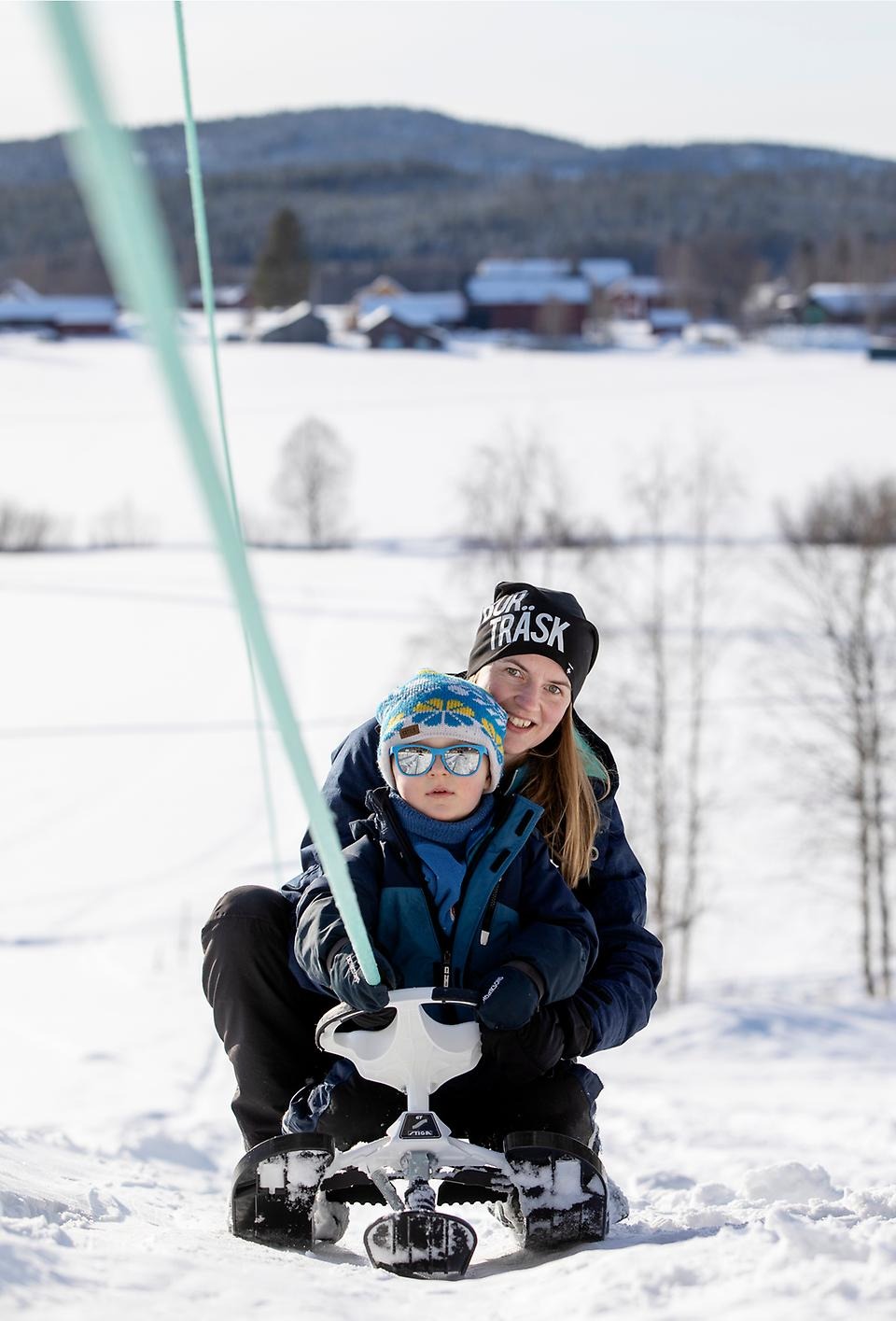